Founder
Connect with me

Mr. Mallard is an “AV” rated trial attorney evidencing his standing through blind peer review as having  the highest possible rating for Legal Ability and Ethical Standards. He is Board Certified in Civil Trial Law, a distinction held by less than 2% of attorneys in Florida recognizing him as a certified specialist in this area of law.  He has been recognized as one of the top 100 Trial Lawyers in Florida annually since 2010 by the American Trial Lawyers Association.  He was recognized as a “Top Lawyer” by Sarasota Magazine in November 2012 and as a "Super Lawyer" in 2016.  He is an Eagle Member of The Florida Justice Association and currently serves on its Board of Directors. This position allows him to be on the front lines of consumer rights in the state of Florida with direct access to the legislature. He is also a member of the American Association for Justice, the Sarasota County Bar Association, the American Inns of Court, and is the current Vice President of the Manasota Trial Lawyers Board.

Mr. Mallard graduated from the Stetson University College of Law, annually recognized by U.S. News & World Report as one of the very finest law schools in the United States in the field of trial advocacy. While at Stetson, Mr. Mallard was First Runner-up Best Oralist in the Freshman Moot Court Competition, served on the Editorial Board of The Stetson Law Review and was a published committee member in the Local Government Symposium's 1990 Digest. He served as a legal extern for the Honorable Elizabeth A. Jenkins, United States Magistrate Judge, in the Federal District Court for the Middle District of Florida in Tampa, Florida in 1989-1990.

For over twenty years after his law school graduation, Mr. Mallard represented insurance companies and self-insured defendants in all types of personal injury cases. For the past several years, he has used the unique perspective and experience he gained during that time in representing victims and their families in all types of personal injury matters and in helping other attorneys and their clients settle their disputes as a circuit civil certified mediator.

Mr. Mallard has successfully tried numerous cases to verdict in fourteen different counties in Florida and has obtained several million dollar or multi-million dollar settlements or verdicts for his clients which has gained him admission into the prestigious “Million Dollar Advocate’s Forum”.

He is admitted to practice law in all of the Florida State Courts, the United States Federal Courts for the Southern and Middle Districts of Florida and the United States Court of Appeals for the Eleventh Circuit.  He has spoken as a guest lecturer at the University of South Florida's College of Business Administration, the Sarasota County Bar Association, the Florida Justice Association, the Manasota Trial Lawyer's Board and has published articles on topics of trial advocacy for the Sarasota County Bar Association and the Trial Lawyer's Section of the Florida Bar.  He has also authored three books on the subjects of Child Abuse/Injury claims, Nursing Home Abuse and Auto, Truck and Bicycle Accidents which can be obtained free of charge on this website.

He is married to Sara and has two daughters, Shannon and Hailey. 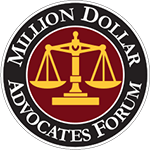